America today is facing a potentially cataclysmic event – an event that could change our nation and our nation’s life forever.  We’ve all heard of people who’ve had life changing events such as surviving a shark attack, narrowly escaping death in an car accident and the like, and how their lives are changed forever.

For America, this potentially life changing event is the hue and cry for gun control.

Cries for gun control are nothing new, and the refrain of those who sing this siren’s song are unchanged from what we’ve been hearing for decades.

“Guns kill people.”
“Guns are dangerous.”
“Why does anyone need to own a gun?”
“If the killer hadn’t had a gun, his victims would still be alive.”

Interestingly, the songs of many opponents of gun control are also largely unchanged.

“I have a right to defend myself.”
“Guns don’t kill people; people kill people.”
“More gun ownership means fewer crimes.”
“I’ve been hunting all my life; you have no right to stop me.”

Sadly, both sides are singing out of tune with the historical reality of why the Second Amendment to the U.S. Constitution says:

“A well-regulated militia being necessary to the security of a free state, the right of the people to keep and bear arms shall not be infringed.”

Let’s take a moment to examine the national & political landscape of America in the last decades of the 18th century when the Bill of Rights was passed.

The Founding Fathers had just survived – somewhat miraculously! – nearly ten years of war against the oppressive, tyrannical government of Great Britain’s King George III.  Firearms in the hands of American patriots had been essential in that struggle. Surely had private citizens in the British colonies not been allowed to own guns, the American Revolution would have never been born.

Scant years later, the survivors who banded together to create the governing document to ensure the long term survival of their new nation wanted to make absolutely certain that in the event of the rise of any future tyranny their children and grandchildren, their successors in the quest for life, liberty and pursuit of happiness would have that same ability to defend themselves.

The need to own arms for purposes of self-defense wasn’t something that was ever really in question in the 18th century. Since time immemorial men had armed themselves for the protection of themselves and their families. No one would have considered bothering to codify that right.

Require a Constitutional amendment to ensure that people could own guns to go hunting? In the 1790’s?  Are you kidding? This was well before Safeway & McDonalds.  People hunted to get their dinner; no one would have questioned that right.

No, “the right of the people to keep and bear arms shall not be infringed” was meant to protect us from tyrants, domestic or foreign, whenever they might arise.

How we resolve this event, how our nation chooses to move forward in dealing with firearms ownership could well change the very foundations of our freedom.

Let us not forget that it’s an extremely slippery slope from liberty to oppression.   Each freedom that the government takes away from the American people is one more step, tiny though it may seem, away from the wonderfully free nation that our founding fathers created for us.

The ability to defend yourself is the ultimate right of all individuals to preserve life, both their own and that of their loved ones. The rights to a free press, free speech, assembly, and religion are extremely important — but none of them matters very much if you can’t defend your own life against aggression. None of them can survive if an evil & tyrannical government should arise if that government is fully armed while its citizens are disarmed and defenseless.

No, our current government is neither evil nor tyrannical – but if we lose that right to protect ourselves today, then if on some future day such a nightmare were to become reality and the armed defense of our liberty were to become necessary, we will be defenseless, helpless and lost.

We as Americans must realize that the right to keep and bear arms does truly equate to a guarantee of freedom.  In illustration of that relationship, let me point out one inarguable historical fact.

Before the Civil War and the Fourteenth Amendment, many states enacted laws that made it illegal for black people, both free and slave, to possess firearms. Why? Because those states feared that an armed populace might rise up and throw off their oppressors.  But with the Fourteenth Amendment those laws were wiped from the books, and from that time on ALL AMERICANS have enjoyed that fundamental right – to keep and bear arms so that if need be we could rise up and throw off our oppressors.

Thomas Jefferson, who had accepted George Washington’s appointment to be the first Secretary of State of the United States, was a strong advocate of the rights of the individual, and a great believer in the need to adopt the Bill of Rights.

If Thomas Jefferson were alive today, he would be, as he was in 1791, a powerful believer in, and crusader for our Second Amendment rights. 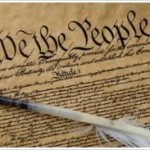