On Oct. 17, President Obama declared victory over the Republican Party after a contentious government shutdown and debt ceiling debate. In a moment of doublespeak remarkable even for Mr. Obama, he proceeded to promise a three pronged economic agenda for the last quarter of 2013.

He pledged to enact a budget (his code word for raising taxes) and a new farm bill, which would expand the food stamps program and institute massive subsidies. In addition, he promised comprehensive immigration reform before the end of this year. It is not a stretch to link this promise to the bipartisan “Gang of Eight” bill which Mr. Obama has repeatedly hawked.

In the same speech where he revived his push for the immigration bill which was openly and unashamedly written by lobbyists and Washington insiders, the President also attacked lobbyists, saying “all of us need to stop focusing on the lobbyists.” He was presumably including the very ones who helped write his immigration bill.

On Oct. 7, 2008, then-Senator Barack Obama declared, “We’re going to have to change the culture in Washington so that lobbyists and special interests aren’t driving the process.” As the immigration reform was authored earlier this year, quite the opposite occurred. The president sat down with business and labor leaders to craft a bill that could benefit them, rather than us.

This lobbying was somehow spun as a positive! The “Gang of Eight” crowed that the bill would have the support of labor and business, and the media gushed about how the bill would surely pass with such a storm of support. Essentially, the corporations and unions were given the opportunity, behind closed doors, to not merely make demands but to actually help write the bill. In exchange, Congress could count on their support.

I don’t blame these lobbyists. The proposed immigration overhaul would have a massive effect on our labor economy, directly affecting the interests of businesses and unions across the nation. It is entirely in their interests to promote their organization. The problem rests on the tendency of the Obama administration, though this did not start with him, to push these massive overhaul bills.

The immigration overhaul is over 800 pages long. Similarly, both the Dodd-Frank financial overhaul and Affordable Care Act (ACA) were massive pieces of legislation. Moreover, the size of these bills is not determined just by this page count. While the ACA is over 1,000 pages, the bureaucratic regulations written for its implementation have broken the 20,000 page mark.

It is the size and lack of transparency of these bills that attracts lobbyists and special interest groups like flies. With a bill of 1,000 pages, it is not obvious to the public, or even to many Congressmen, when a lobbyist has written in a provision or two.

Let us briefly examine an example. The ACA does not seem like the sort of legislation that would concern the National Rifle Association (NRA). Yet, somehow, Title X on page 2,037 of the ACA, contains five provisions concerning conversations about guns with doctors. It is difficult to imagine how this came to be. The NRA is a powerful conservative group which did very little to oppose the ACA. Is it such a crazy suggestion that the NRA was allowed to add these provisions to ensure that they would not work to defeat the bill? Perhaps the truth of the matter is not quite so incriminating, but the role of lobbyists in crafting legislation is well documented. The larger the piece of legislation the more ripe it is for such manipulation.

This immigration bill that the President has promised to push through Congress is officially dubbed “The Border Security, Economic Opportunity, and Immigration Modernization Act of 2013”.  It joins Dodd-Frank and the ACA as another example of the massive, far-reaching overhauls pushed by the Obama administration as their answers to America’s ills. The hordes of professional lobbyists see in this proposal endless opportunities for themselves and their well-paying clients.  Unsurprisingly, they have joined in the frenzied, whole-hearted effort to see its hundreds of pages become the Law of the Land.

Once again, we risk having a massive piece of legislation, one holding a very significant long term impact on the American public, and yet written predominantly behind closed doors, rushed through. I ask you, “What is the big rush?”

This is not the way the Constitution intended for legislation to be enacted. Our Founders feared the power of special interests and warned against allowing massive, multi-facetted bills to be pushed through Congress. This reckless, imprudent process both denies the transparency needed to understand the content of these bills and simultaneously allows lobbyists to include whatever self-serving provisions they desire.

As this article is being written, the Obama administration promises on its own website, “an unprecedented level of openness”, and proclaims that “Government should be transparent.  (emphasis is theirs) Transparency promotes accountability and provides information for citizens about what their Government is doing.”

While Mr. Obama has outwardly rejected lobbyists both during his 2008 campaign for the Presidency and in his recent speech now in 2013, his call for the urgent passage of immigration reform is really just a call for one more colossal, lobbyist-ridden bill. As Nancy Pelosi said about the ACA, we have to pass it to know what is in it.

As curious as I am about this immigration overhaul, I am certainly not curious enough to pass it before we understand it. 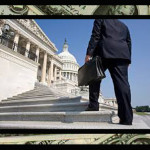 « Clueless In Washington
Veterans Day, November 11. Freedom is Not Free. »