In time of crisis, do we want a leader who offers courageous leadership, or one who cautions “we should be worried?”

Early on, during the American Revolution, one of our greatest naval heroes, John Paul Jones, found himself and his ship, the Bon Homme Richard, in dire peril. Locked in battle with the much larger British ship, the HMS Serapis, Jones, his ship in flames and near sinking was taunted to surrender by the British captain. His reply:  “I have not yet begun to fight!”  He didn’t say, “Oh, I don’t know, maybe we should be worried.”

The United States Constitution says “all bills for raising revenue shall originate in the House of Representatives”. What exactly does that mean?  It means that when it comes to raising and spending money, the House must begin the process.  Why? Because at the time of the framing of the Constitution, the founders deemed that it was the House that was closest to the people since it was directly elected by the people.

The Senate was elected by the respective state legislatures until the passage of the 17th Amendment in 1913 gave the power to elect senators directly to the people. The President then and to this day is not elected by the people directly, but rather by the members of the Electoral College.

And so the signers of the Constitution, believing that the one body elected directly by the people would be most understanding of, and responsive to, the will of the people gave the House control over the nation’s purse strings.

That has not changed. The House is still closest to the people as its members are elected every two years, not every six as are Senators.  It is the House, not the President, not the Senate, which is responsible for initiating all bills having with raising and spending money.

But is there not, you might ask, a provision in the Constitution that says, “If the President urgently believes that certain specific financial measures are necessary for the proper conduct of the Government, shouldn’t the House appropriate such funds as the President so desires?”

Of course not! The entire theme of the division of powers lies at the heart of the foundation of our country. When the Constitution was ratified one of the provisions that made America so unique is that the President cannot dictate to the House and the Senate what they should do.

They have to act together.  That is the essence of our system; checks & balances, compromise, working together for the common good.

Compromise was evident time and again throughout the four months of debate and discussion that preceded the adoption of our Constitution.  One of the first major differences of opinion, and one quintessentially recognized by any student of the history of the Constitution, was between the larger states and the smaller over how legislative representation should be allocated. As we all know, this was resolved by what is sometimes called the “Great Compromise” of the Convention. The constitution created a bicameral legislature, two bodies with different means of selecting their members.  In the House of Representatives population is the determiner, but in the Senate each state is represented equally with two members, regardless of its population.

We’ve been compromising for two and a half centuries.  That’s the way it works here in the US – we work together, and we compromise. Our leaders manage to find ways to solve our problems together.

The United States has surely had its share of great leaders.  No, let me correct that.  I believe we’ve had far more than just “our share” of great leaders, we’ve had blessed with a plethora of great leaders, year after year, decade after decade, century upon century.  Our leaders have been men and women of courage, of heroism, often genius.

From our earliest times, America’s leaders throughout our history have counseled courage in time of fear, confidence in times of uncertainty, and both resolve and determination in the face of danger.

Admiral David Farragut, leading US Naval forces at the Battle of Mobile Bay on August 6, 1864, was warned by his staff of deadly explosives lying between him and a possible victory over the enemy fleet.  He gave the immortal command:   “Damn the torpedoes, full speed ahead!” and his ships won the day.

President Franklin Delano Roosevelt, newly elected in the fall of 1932, facing the greatest economic depression in the history of America and speaking at his inauguration, called for bravery in the face of uncertainty, rallying our citizens to rebuild our country with a cry to courage:  “The only thing we have to fear, is fear itself!”

In January of 1960, President John Fitzgerald Kennedy, a decorated veteran who fought to defend American in the Second World War energized America with the words:  “Ask not what your country can do for you, ask what you can do for your country!”

We now find ourselves again in crisis. Though perhaps not quite so dire as those times cited above, still America is faced with a “government shutdown”, with the coming “debt crisis”, both of which are because  the Executive and Legislative branches of our national government cannot compromise and formulate a concerted and cohesive financial plan for the ongoing future of the United States of America.

Facing the lack of funds necessary to continue to provide vast numbers of government services to our citizens, and the further uncertainly created as we approach the legal ceiling on our mounting national debt what does America’s leader, Barack Obama have to say? What words of courage, inspiration, and resolve does the President of the United States offer to the American people?

“We are in trouble,” said Mr. Obama, speaking to CNBC’s John Harwood on the evening of October 3.

When Mr. Harwood made the point to Mr. Obama that Wall Street didn’t seem concerned about the ‘shutdown’ and asked whether that was the way they should be thinking, the response was:

“No, I think they should be concerned”.

These words do not express confidence in America, do not exhibit the kind of resolve that Presidents Roosevelt and Kennedy expressed in their comments cited above, nor do they reflect the courage and determination shown by the heroic words and deeds of John Paul Jones and David Farragut.

No plan for compromise has been offered by President Obama to end the budget stand-off. In fact, in his brief public statement on September 30 just hours before the government shutdown he neither offered to work to formulate a compromise nor suggested that he would even be willing to accept any kind of compromise.

Is Mr. Obama trying to scare investors and refuse any compromise that might alleviate this crisis?

Could our President, the elected leader of our nation, actually be hoping that the stock market crashes, taking the hopes and dreams, retirement plans and college education funds of millions of Americans down with it?

Because…it might give him a political advantage?  It appears as if a number of financial analysts fear that to be the case.

On October 3, “Squawk on the Street,” CNBC co-anchor Simon Hobbs and senior economics reporter Steve Liesman pointed out the administration’s strategy of trying to scare the markets in order to sway opinion against Republicans. “They’re not scaring the market which is clearly their aim,” and went on to cite a Treasury Department report that makes the extreme claim that a default would result in “the next Great Recession.”

The next day, October 4, Jerry Castellini, co-founder and president of CastleArk Management, said on CNBC, “the administration would love for the markets to be down quite a bit right now to try to amplify their point that this is an area we shouldn’t be playing in and a spot that the markets don’t want to see us in.”

What is scary is that instead of words of encouragement, a pledge of resolve, and an expression of confidence in the courage of America and the American people to face down this crisis like so many others in our past history, this President of the United States is telling us that we’re in trouble.

There are only two conclusions to be drawn.

The first is that Mr. Obama is truly afraid, and has no solution in sight.

The second is that he’s hoping that if the stock market plummets, it will panic enough people so that he’ll be able to brow beat the House of Representatives into surrendering to his demands.

If Mr. Obama is running out of courage, that is not a harbinger of good things to come.  If he is actually hoping for the sacrifice of the financial holdings of millions of Americans to achieve his own political ends then that is most definitely far worse, and can only be described as despicable. 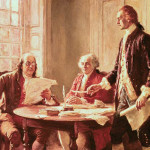