The recent debate over intervention in Syria demands a broader discussion of the United States’ role in the international community. While the notion of an imminent military strike seems to have passed for now, we should not let this incident slide into obscurity. It is time to critically evaluate American foreign policy and to determine what role our nation must have as a part of the international community.

For years we have been considered the “world’s policemen”, a role that is untenable and often promotes the interests of foreign countries over our own. This role has a lengthy history, but it is important to examine how our foreign entanglements have changed over the last couple of decades. During the Cold War, we could not police the entire world, but we were tasked with preserving stability in what was then referred to as the Free World, with the Soviets enforcing stability on their side of the Iron Curtain. During the Cold War, we actively worked to promote our interests throughout the world. We supported regimes that opened trade with the United States, and we suppressed rebellions that would disrupt the stability of allied countries and crucial regions.

The end of the Cold War saw a collapse in this international balance, with the former Soviet states incapable of enforcing the stability to which the Eastern world had grown accustomed. In the intervening two decades, the United States has been called in to act as an enforcer of international law. Time and time again, we intervene in foreign affairs due to human rights violations or as part of a UN or NATO task force. The crucial difference being that rather than engaging in competition with our political and economic enemies we are enforcing the dictates of international conventions and organizations. We have shifted from pursuing foreign policy concerns that further our interests to channeling our resources into matters which are necessarily to the benefit of our citizenry. It is this change from national concerns to international concerns that must be re-evaluated.

The duty of a national government is to promote the interests of the nation first and foremost. The Founding Fathers understood this, with political ideals derived from the philosophical tradition of social contract theory. This theory held that individuals came out of the state of nature (a state of anarchy before political institutions) in order to enjoy certain benefits that they had lacked in the state of nature. John Locke was arguably the most influential of these political philosophers on the founding of America, and he claimed that individuals join together in governments in order to protect their natural rights and allow for some impartial judge to adjudicate disputes between members of this government.

In this philosophical context, I will call upon George Washington’s famous farewell address of 1796. This speech is often quoted as an endorsement of isolationism, but it is more complex than that. “It is our true policy to steer clear of permanent alliances with any portion of the foreign world; so far, I mean, as we are now at liberty to do it; for let me not be understood as capable of patronizing infidelity to existing engagements. I hold the maxim no less applicable to public than to private affairs, that honesty is always the best policy. I repeat it, therefore, let those engagements be observed in their genuine sense. But, in my opinion, it is unnecessary and would be unwise to extend them.”

The salient feature of Mr. Washington’s speech is its warning against the idea of entangling alliances. In the 1790s, war was brewing between France and England, and Washington was afraid that an alliance with either one would drag the fledgling nation into war and destruction. Today, we do not primarily fear being brought into a war where we will be overpowered and crushed, and we certainly are not overshadowed militarily by our neighbors. The dangers of entangling alliances, however, remain as they can obligate the United States to enter conflicts which are of no benefit to its citizenry.

It is generally accepted that a strike on Syria does not promote our national interests. We have been reluctant to even arm the opposition, in fears that the widespread conflict will spread to other regions. The idea that conflict in Syria could spill even more into Israel and Turkey, or even into Iran, is a terrible specter that has given American policy makers pause time and time again (cite). Furthermore, it seems clear that, regardless of which side wins the Syrian civil war, we will not find an ally there. Assad will continue to work with Russia, China, and Iran, which certainly would not promote our interests. If the rebels succeed, we face the prospect of a hardline Muslim regime. Egypt’s brief rule by the Muslim Brotherhood certainly did not further United States interests, suggesting that a similar regime in Syria would be equally inhospitable. The destruction of Assad’s regime, moreover, would promote instability in the country, just as Mubarak and Gaddafi’s overthrows did.

Instead the impetus for a strike is based on the so-called “red line” advocated by President Obama. In 2012, Obama declared that he would intervene in Syria if Assad were to use chemical weapons. When Assad eventually did use chemical weapons, Obama announced that we would strike Syria and destroy their capability to use such tactics. A hailstorm of criticism against Obama harangued him for not consulting Congress before establishing this “red line” as it forced our foreign policy credibility to depend on a unilateral policy statement by the president. Obama responded to this criticism claiming that it was not his red line, but instead it was a line drawn by the international community. Despite the lack of UN support for the strike, Obama claimed that the international community had historically condemned and forbidden the use of chemical weapons as enshrined in the Chemical Weapons Convention. A failure to enforce these laws, he said, undermines not just his credibility but the credibility of these international agreements.

Let us take Obama at his word for a moment. There is certainly a lot of international legal precedent against the use of chemical weapons. Obama’s claim that there is an international red line is accurate, but why does that mean that America must enforce those laws? This is an even more pressing question given that the UN itself is not supportive of a strike. How is the enforcement of international law in this case important enough to outweigh all the potential negatives of a strike? Our president’s desire to spend American taxpayer dollars and jeopardize American national security and economic interests in such a manner sets this international law over the pursuit of American interests. How is this the proper function of our government?

Now, of course, I must be charitable towards President Obama. He is our president after all. There are plenty of arguments for why a strike on Syria is necessary for American interests. While I explain these arguments, please keep President Washington’s warning in mind.

The President of the United States did set an ultimatum concerning the use of weapons of mass destruction. If he chose not to enforce this declaration, it would undermine the credibility of the United States on international matters. South Korea has expressed fear that North Korea would not be deterred by American threats of violence. This is a problem similar to that which faced President Eisenhower when the Soviet Union invaded Hungary. He had pursued a foreign policy which asserted that the United States would attack the Soviets if they attempted to expand in such a fashion. When he did not uphold this threat, it undermined our credibility and foreign policy strategy. This is a very real problem in today’s age, as we attempt to enforce global stability and support our allies across the globe.

So here is the crucial problem. We have become obligated, based on our extensive involvement in the international community, to advance a foreign policy agenda that does not promote our interests. It does not promote our economic ties, nor does it advance allied interests in Syria, nor does it promote stability in the region, yet it is necessary to strengthen our credibility given our traditional role of enforcing international law. We have entangled ourselves so hopelessly in the international world, so completely embraced this internationalist mentality, that our government is compelled to act against our interests.

This dilemma does not mean that the United States should pursue a policy of isolationism. There are plenty of ways in which our foreign involvement does benefit the United States. We promote economic growth in countries that either manufacture goods for export or purchase American products, and we ensure stability in regions that are crucial to our national security and economic interests. The extent of this involvement, however, should be a pragmatic one. The pursuit of international law and order, as we can see with Syria, is not a pursuit in and of itself that benefits the United States. We must be aware, however, that our leaders should be looking out for our interests, not those of the UN Security Council.

The debate over Syria should be a wakeup call to America. It teaches us that our foreign entanglements have reached such a point where we can no longer be the sole judges of our national policy. By refusing foreign involvement in Syria, we can start a precedent that the United States is no longer the world’s policeman. We must demand that our leaders uphold our laws and our interests, not those of the international community. 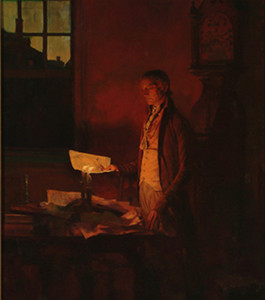