On the night of February 16, 1804, Lieutenant Stephen Decatur led a small force of U.S. Marines on board a small captured Tripolitan vessel re-named the USS Intrepid close enough to the USS Philadelphia to board her. Under Decatur’s leadership, the Marines stormed the ship and overpowered the pirates to take control. With fire support from  American warships, the Marines then set fire to the Philadelphia, destroying her in order to prevent her future use by the enemy. British Admiral Horatio Nelson, one of the all time greatest heroes of the British navy, reportedly called this “the most bold and daring act of the age.”

Did the United States undertake this campaign on its own?  Did Congress approve of President Jefferson’s deployment of US naval forces?

Emphatically not!  While Congress never made a formal declaration of war, they did authorize President Jefferson to issue orders to the commanders of American ships-of-war to seize all vessels and goods of the Pasha of Tripoli as well as “to cause to be done all such other acts of precaution or hostility as the state of war will justify.”

As allies, the Americans squadron joined a Swedish flotilla under Rudolf Cederström in blockading Tripoli, the Swedes having been at war with the Tripolitans since 1800.  US forces were also aided by King Francis of the Kingdom of the Two Sicilies who supplied the Americans with manpower, craftsmen, supplies, gunboats, mortar boats, and the ports of Messina, Syracuse and Palermo to launch the offensive against Tripoli.

In the painting shown here, the small boat in the near left corner is the Intrepid carrying the escaping Marine raiders away from the flaming Philadelphia. 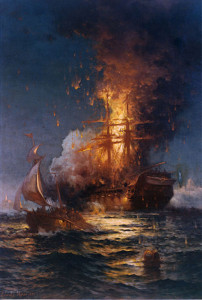 « Leading the Way?
The Yardstick »