With the recent resurgence of President Obama’s push for gun control, it is important to critically examine the meaning of the Second Amendment. This word “critically” is crucial here. It is often argued by proponents of gun control that the Second Amendment does not protect the individual right to own guns but instead protects the rights of the states (or the federal government) to maintain militias. It is true that the reason for which the “right of the people to keep and bear arms shall not be abridged” is that “a well regulated militia being necessary for the security of a free state”. Such an interpretation of the amendment, however, does not take into account the original context of the words and the intent of the “well regulated militia” clause.

In order to understand the original understanding of this clause, this article will critically examine two primary sources from the Founding era which served as the backdrop to the ratification of the Second Amendment.

As we all know, in 1776 British oppression had reached a breaking point in the American colonies. One of the primary examples of this oppression was the abuse perpetuated by British standing armies on American liberties. Virginia, specifically, had faced these difficulties with exceptional intensity. By June 1776, Lord Dunmore, colonial governor of Virginia, had threatened martial law, engaged in conflict with American rebels, and burned the city of Norfolk. Elsewhere in the colonies conflict with the British troops had reached the point of open rebellion and many Virginians were particularly outraged by the military rule that was imposed upon Boston at this time.

With this historical background, we can better understand the emphasis in favor of the right to bear arms and the fear of standing armies in Virginia in 1776.

Section 13 of this document states: “That a well-regulated militia, composed of the body of the people, trained to arms, is the proper, natural and safe defense of a free state; that standing armies, in time of peace, should be avoided as dangerous to liberty; and that in all cases the military should be under strict subordination to, and governed by, the civil power”.

Let us take a moment to break this down. First, it is clear that standing armies ought to be avoided. This is not a declaration in support of simply having standing state militias. Whatever we are to glean from the rest of the statement must preclude an endorsement of standing militias. Second, we have a definition for a “well-regulated militia”, specifically that it is composed of “the people”. This wording certainly differentiates it from a standing army of government troops.  From these deductions, it can be concluded that the Virginia Declaration of Rights sought to protect the people’s ability to be trained in arms, rather than to support a standing government militia.

Let us continue our examination to another document, this time written by Thomas Jefferson himself: his draft of the Virginia state constitution. While this draft was not adopted by the state of Virginia it is an important insight into Jefferson’s own conception of rights. Jefferson was one of the most influential politicians in attempting to include a Bill of Rights into the Constitution, so his vision of rights gives a strong indication into the intent of the Bill of Rights.

Jefferson is unequivocal in his fear of a standing army: “There shall be no standing army but in time of actual war”. I have difficulty imagining another logical interpretation of this sentence. Furthermore, he is equally explicit in supporting a personal right to arms: “No freeman shall be debarred the use of arms [within his own lands]”.

A clever and perhaps skeptical reader will immediately latch onto both exceptions to a right to bear arms in this provision. More interestingly is his allowance that a freeman may be debarred the use of arms outside of his own lands. A compelling but irrelevant argument may be made that Jefferson allowed for instances where the use of weapons in public spaces may be prohibited.

Exceptions aside, Jefferson’s draft clearly protects the right of citizens to keep weapons in their homes, as he specifies the rights of arms within one’s own lands. Juxtaposed with such a fear of standing armies, we can deduce intent similar to that in Mason’s Declaration of Rights: that the possession of arms is a necessary check on the power of a standing army.

In the modern era we have a powerful standing army that stretches across the world. There is, of course, no provision in our Constitution against the existence of such an army, but there are a few major checks on the power of the military, such as the Third Amendment. The Second Amendment, taken nearly verbatim from the Virginia Declaration of Rights, and advocated for by Jefferson, whom we know to have supported the personal right to bear arms and opposed a standing militia, can now be understood better according to its original intention.

The “well regulated militia” clause can certainly not be construed as endorsing standing militias. Instead the Second Amendment ought to protect the freedom of an armed populace with the right to bear arms as a check on the military authority of a standing army. 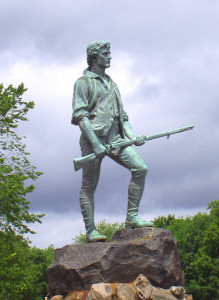 Response to A Well Regulated Militia